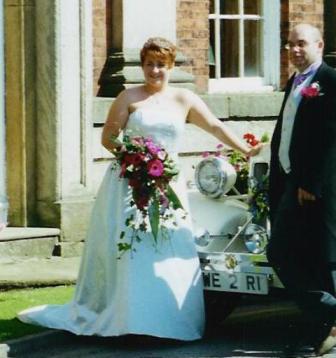 Kerry wanted a silver dress, but didn’t want it to look like tinfoil!  We found a soft silver brocade with a pattern of daisies scattered on it which she loved.

She had tried on strapless dresses, but they all seemed to be too low at the neckline and she wanted the illusion of a smaller waist.

With this in mind, First of all I made a toile to her measurements, cut with quite a high neck but coming down softly to the underarms.  Boning on the corseted bodice nipped in her waistline which was also emphasised by the medium sized 'A' shape skirt.

To carry on the daisy theme and reflect the colour of the bridesmaid dresses she chose bright Gerberas for her bouquet. 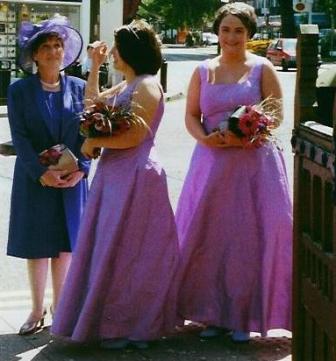 Nicola is in this picture as one of Kerry’s bridesmaids.

She had enjoyed having that dress made and so came back to see me when it was her turn to be the Bride! 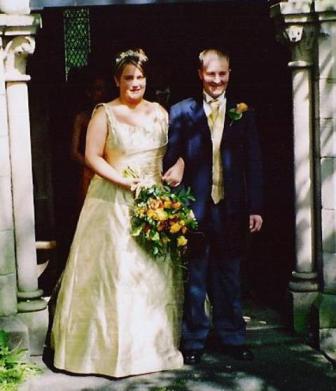 We found a gold Silk Dupion with a lurex thread running through it which made it shimmer.

To slim down her waist and bust, we used sloping pleating at random intervals and decorated the remaining neckline part of the bodice with coloured beads sewn into clusters to resemble flowers. 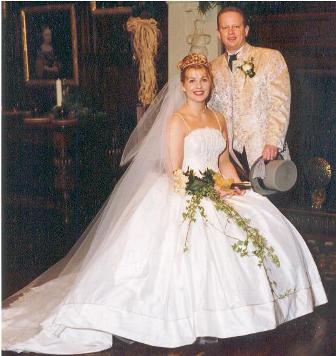 Jo won’t mind me saying that her hips are out of proportion with her trim upper body and wanted them to look reduced in her wedding gown.  She wanted an ivory dress with touches of gold, and a lot of detail on the back of her dress.

We found an organza embroidered in gold and used this in a large triangle which started at the bottom of the bodice going out to the hemline on the back train.

The skirt was pleated onto the  waistline which slimmed her hips and gave even more definition to her waist.

Strips of boning covered in ivory silk were placed symmetrically on the centre front bodice panel and the organza shapes overlapped the boning. 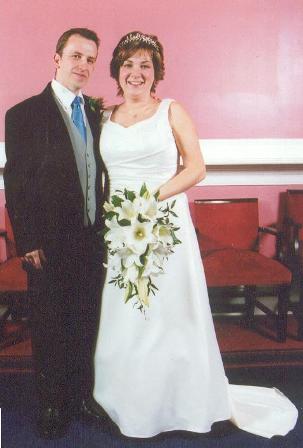 Rebecca didn't have a small waist but did wear a 38F bra.

I showed her that by taking the pleats in a gradient under her bust to her waist gave the illusion that her bust was smaller because it had been "cut" up by the pleat line.

Going down to the waist also drew your attention there and made it smaller.  By the time the wedding arrived Rachael had discovered that she was 6 months pregnant! 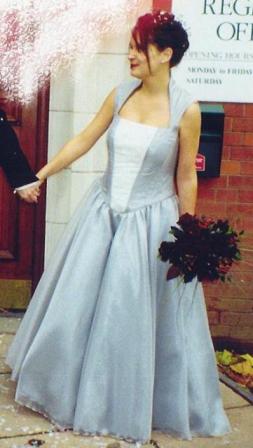 Sophie knew she would be 34 weeks into her pregnancy on the day she got married.  Her mother didn't want her to miss out on having a proper wedding dress.

So they knew they would have to have a dress specially designed.  Sophie suited silver and liked organza skirts.

So out came the swatches and the colour was chosen.

Sophie liked and had already worn this neckline shape and wanted a high back neck. 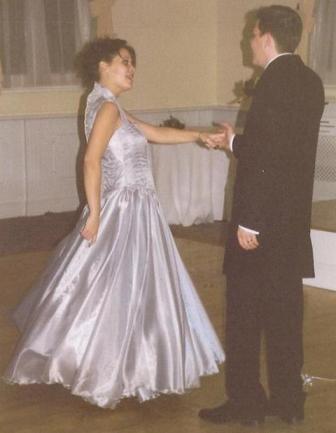 I showed Sophie a sample bodice with an embroidered panel with a small design of hearts.

This was to be used on the centre front and back panels - I suggested using a smoky coloured crystal at the centre of each heart so the panel tied into the surrounding colour.

Everything went well and Sophie now has a son!