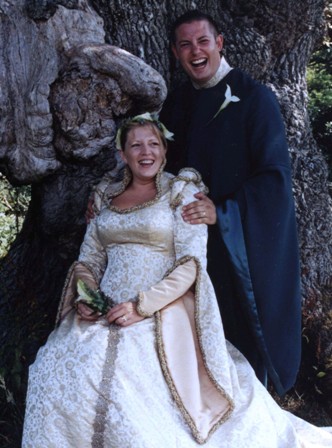 Michelle and Joel had booked a hotel in the for the whole weekend for their entire wedding party.  They were both “Lord of the Rings” fans and had requested on the invitations that everyone attended in appropriate costume.  Joel wanted a velvet cloak in bottle green and also wore a waistcoat in the same fabric that Michelle had chosen for her dress. 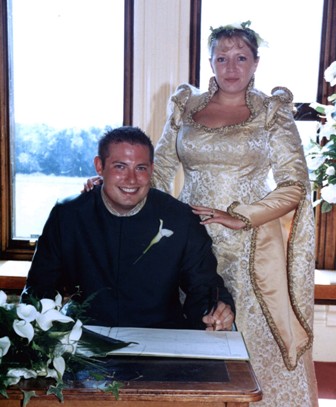 Michelle saw and fell in love with a gold brocade fabric sample I showed her. Because she knew exactly what sort of braid she wanted to trim the neckline and sleeves I suggested we look at furnishing trims.  Michelle wanted a metal belt at hip level to fall down to the hemline of the dress.  She managed to find 3 belts which would give the required length and I then "melded" them together and the dream dress became a reality. 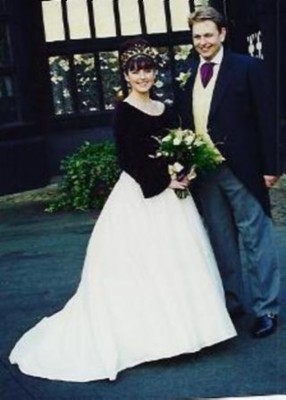 Hilary knew what sort of neckline, sleeve and colour of velvet she wanted.  Their wedding ceremony was to be at Bramall Hall, and she wanted a dress that would "fit in" without being a “costume”. We started by looking through my velvet swatches to find the right colour   Hilary brought with her a favourite dress which had the neckline exactly as she wanted for her wedding dress. We then looked through my period costume books to find a sleeve shape that was a bit unusual.  She liked a full, billowing skirt and her ideas became reality. 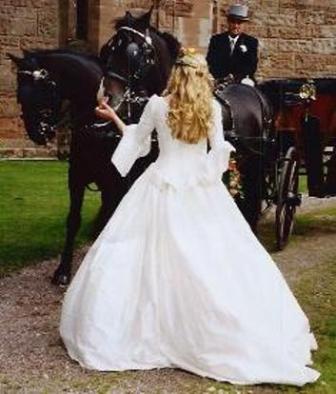 All of Zoe's family loved horses and she had always wanted a horse and carriage to take her to her wedding which was to take place at Peckforton castle.  So her dress had to reflect a bygone age.  We found an embroidered fabric she liked and made the whole bodice and sleeves in it and then matched it to a plain silk in the same colour for the skirt.  The back of the dress resembled the back of a traditional riding habit and the front neckline was reminiscent of that Anne Boleyn would have worn.  She set her hair with rags to give a soft effect and drew back the sides into a soft twist into which she got the hairdresser to weave fresh flowers.  This was how her 15/16th century look was achieved. 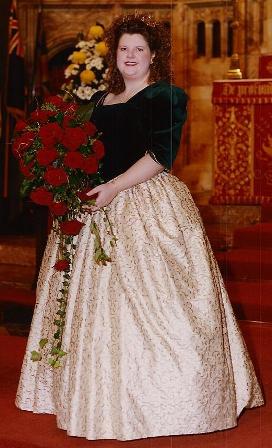 Hayley didn't want to wear an ivory or white dress. She has always loved rich jewel colours and wanted a velvet bodice.  I showed her various samples of  different embroideries on gold fabric from which she chose a scroll design for her skirt.  We then looked through the velvet swatches to go with it and chose dark green.  As far as cut was concerned she knew she wanted a big gathered skirt with extra layers of petticoats to give a “farthingale” effect. 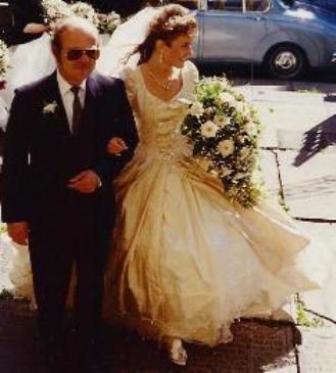 Melanie had pictures of two dresses which both had parts she liked.  From my swatches she chose a peach/gold brocade, I matched this with a plain duchesse satin for the centre panels.  The front bodice had fabric stretched across it and caught at the centre to resemble bows to which I added a hanging pearl drop on each. Bows were also added to the cuff of brocade and lace. She chose a champagne guipure lace which was decorated with hanging pearls as a trim on the brocade overskirt.  Her dress was a real confection and she absolutely loved every detail on it. 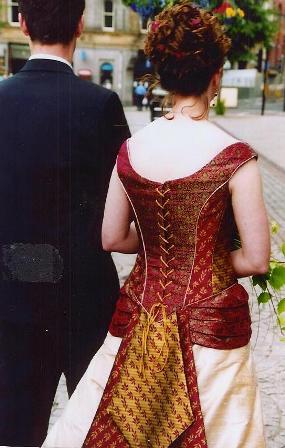 Rachael's wedding was at .  She liked the gothic architecture and wanted her dress to have colour.  We chose a red silk material which had the advantage that it could be used on both sides giving a red background on one side and gold background on the other.  Rachael brought with her a vague line drawing of the bodice styling and dress outline.  I used the red/gold fabric on the dummy to show Rachael what she had drawn.  Rachael realised that some aspects of the drawing didn't look as she expected. I showed her how we could change those aspects to advantage and also incorporated another fabric which matched her colours. 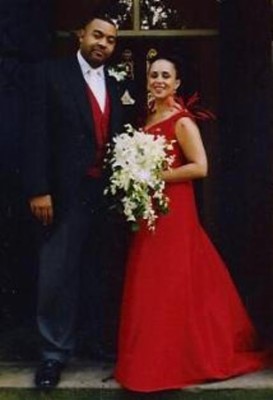 Diannah liked watching films and had seen the look she wanted on screen.    The original dress was ivory with long black feathers at the shoulders.  I pointed out that these feathers were too fragile and wouldn’t stand up to a "real" wedding day.  Diannah wanted her dress to be in red, so I found dainty soft red feathers instead, which were more suitable, and still gave emphasis at the shoulders.  The dress was made as a two piece so that the bodice could be worn again. 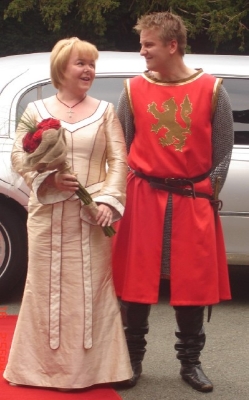 All the guests at Carol's wedding were asked to dress in Tudor costume as her wedding was at Bramall Hall.  She wanted a gold dress and it had to be tudor style.  We looked through my period costume books and chose elements from a few different styles.  I showed Carol how effective using a contrasting fabric could be to show the cut of the dress.  Carol liked this idea and as her fittings progressed she could see the chosen ideas from the pictures coming to life.