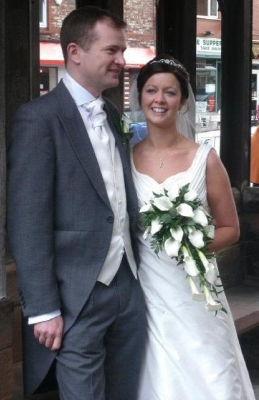 Lisa wanted her dress to give her height.  From the dresses she had tried on she had found she liked those with an empire bodice (finishing just under the bust).

I suggested that we also swathe some of the skirt fabric diagonally across the body as this helped draw the eye down too.  At one of her fittings her Mum remarked how short she looked when she was back in her everyday clothes!

Lisa had tried dresses on which seemed very “heavy” to wear and was delighted with her Thai Silk dress as even with a fairly long train it felt lovely and light. 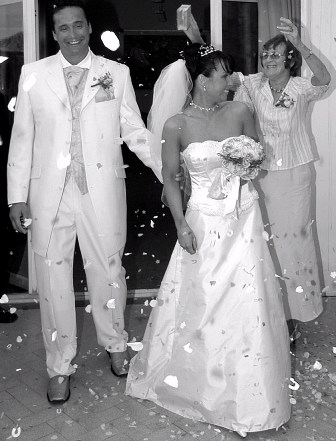 Louise’s groom, Pete was very tall and she whilst she couldn’t grow any taller other than her 4” heels and wearing her hair piled on top of her head, she wanted as much height as she could from her dress style.

She chose a bodice which had a scalloped neckline and waistline, but knew she wanted her beading at both these areas to be unusual.

The skirt was a harder choice:  she had set her heart on a drape front skirt using either organza or Thai Silk.

After I had shown her what the two fabrics would look like she slept on the idea and decided it was better to keep the skirt perfectly plain as leaving out the draping did make her look taller! 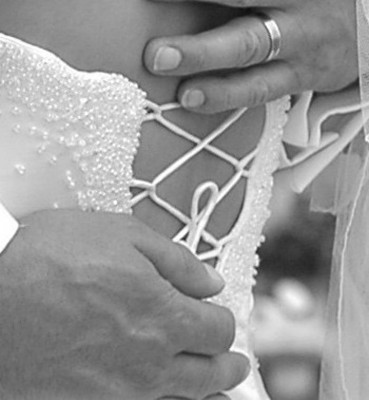 I did some samples of beading using crystals of different shapes and sizes, then we both decided on the amount and placement of the spattered beads which “filled” the rest of the bodice.

The type of back lacing she liked gave a focal point at the back of the dress. 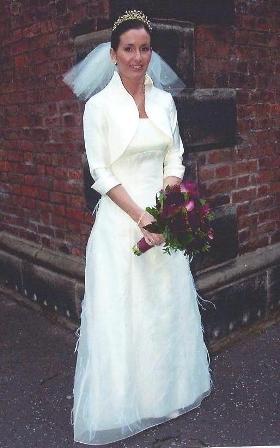 Fiona’s wedding was in December so she needed a shrug jacket to keep her a bit warmer!  Long sleeves swamped her so three-quarter length was chosen.

She suited a collar which nestled into her neck.

Being so petite she suited a princess line cut which has seams from under the bust to the floor to elongate her as much as possible. 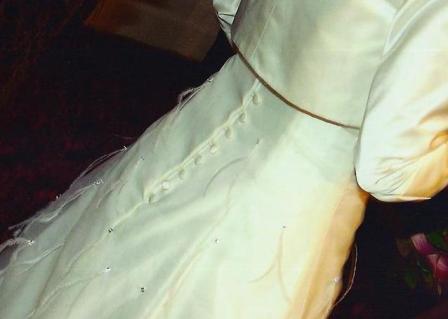 She had seen an organza skirt decorated with fronds from ostrich feathers.

These feathers are around 4” long and being so light they floated around she moved.

I sewed them in pairs to the organza at their ends, covering with a diamante stone. 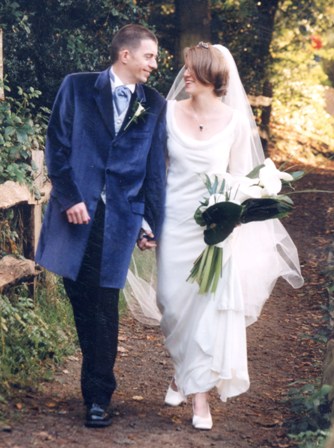 Having tried different shapes on found that she loved bias cut styles as they hugged her figure and were extremely comfortable to wear.  Her dress featured corkscrew styling (the seam goes below hipline up to underneath your ribcage on the opposite side – there are no side seams the only one is at the centre back).

My main priority with this cut was to ensure that the seams were at the correct gradient and  that the French darts gave a more defined waistline.

Once this was perfected and the neckline created – she had her unique gown. 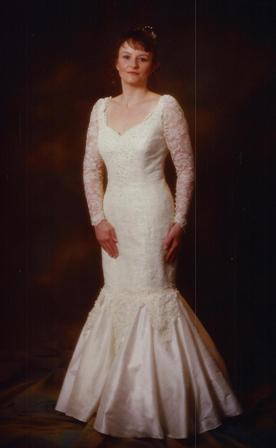 Cathy wanted her dress to give her more height.

Together we chose this style as it elongates the body.  She was used to heels and this meant that the fishtail skirt could be a longer length which added to the illusion of  height!

She wanted some extra detail on the front of her dress so I added beads to the whole neckline going into a V shape to the ribcage. 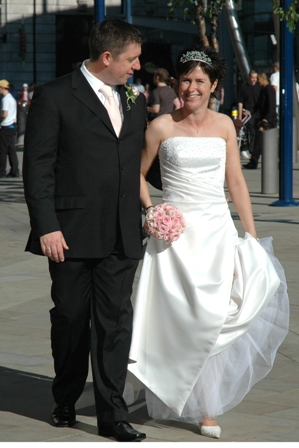 Jo wanted a classic and elegant style with a touch of sparkle.  But she wanted to appear taller!  The style she chose was an 'A' shape.

I tapered in the skirt below the hipline to give a sleek silhouette.

Her bodice had crystals spattered above the pleating and the beading at the neck edge was also added to the edge of the overskirt.