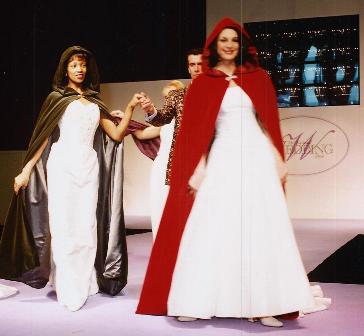 Your wedding doesn’t have to be in the winter for you to wear a cloak and they don’t have to be made in velvet!  They can look just as effective in see-through fabrics.  For instance fine floaty feathers can look very effective – either used at the edges or just around the hood or spattered all over the “skirt” part of the coat . 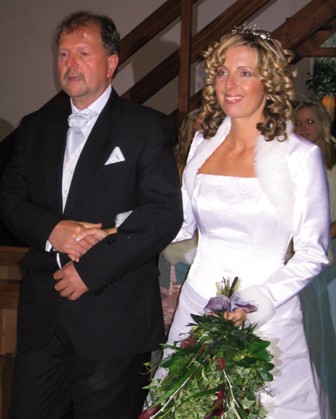 Heidi got married in December and had always wanted a fur trim on her jacket. She had chosen fur muffs for her two bridesmaids.  I used the same fabric as her bodice for the jacket and trimmed the neckline and cuffs with fur to enhance the shaping of the jacket. 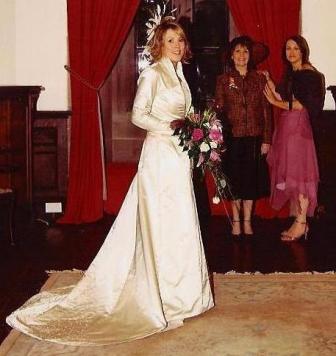 Sally's wedding was at in December – not the warmest of places!  She wanted her coat to be in a plain fabric to contrast against the lace of her dress. I added detail to the back of the coat with a mock “belt” scattered with five types of crystals.  A large portion of the back of the train was also beaded. 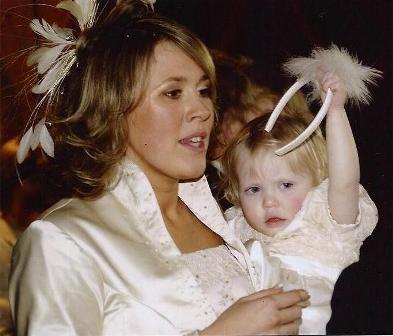 I also added beading to the inside of the collar reveal as well as the outside as it looked far more effective than leaving it plain.  Sally is carrying her daughter, Anna, who was christened on the same day.  Anna was 18 months old so she had a dress instead of a robe.  We used Sally’s lace over ivory fabric for the bodice and small puff sleeves. 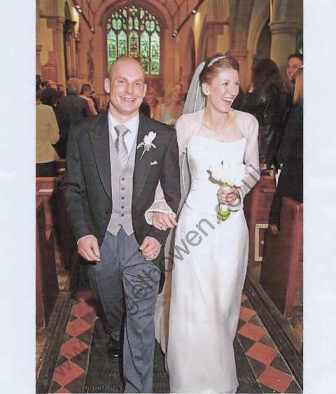 Angela got married in April and thought that she may be cold in her strapless dress.  She chose wisely as it did in fact snow in the morning!  As her skirt had an organza overlay I suggested the jacket be in the same fabric.  I trimmed the neck with crystals every 6 stitches and they also featured at the wrist of the sleeves which had fluted cuffs.